Hip Jesus or Christ Among Us 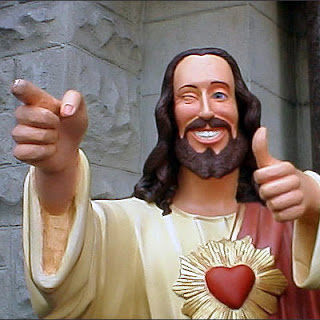 An empire being forged, great wealth in the hands of a few, power the name of the game, and winning at all costs co-opting Jesus as supporting one's righteous (sic) cause over another's--the more things change...

"Right" or "Left" doesn't matter. Jesus drips nice platitudes of individual salvation, blessing greed along the way for the Right; he becomes the great social revolutionary to the Left, speaking only of corporate sin. In their quest to make Jesus hip, both "sides" strip him of who he is: the humanity of God.

In the poetic subtlety of the Beloved, Jesus radiates Triune Light and Love, because he participates therein. How that happens, I do not know. That it expresses reality in my heart challenges me to surrender, to walk with him and touch those needing the Good News.

But a big part of such blessed tidings involves letting Jesus and his Way challenge us to the core, not just those whose views we do not share. It means dropping the caricatures, the idols, we have of Jesus, this garden-statue niceness, and allowing the flesh-and-blood Lord transform and transfigure us. Doing anything less renders him impotent, which is where too many of us really want him, but that's not Who he Is.

Ya, there have been thousands of god-men in various cultures, fine. Name one who has ever been described as fully human and fully divine, NOT some half god, half man spawn of capricious gods having their way with some hapless mortal female. Jesus is simply not the same, being born of a woman who says 'YES' to God.

But even saying that, it seems to me that God weaves a tremendous tapestry in different colors and textures.  It is not for me to force anyone away from his or her religion or to judge what they believe.  Two people can disagree about the specifics, but, when they transcend those differences below the surface level, they find a deep unity, even when their respective traditions don't agree. Let us come together where we can, rooted, however gently, within in our respective traditions.

None of what I have written thus far changes anything much in my previous posts regarding 'disorganized religion' nor does it invalidate my calling as an interspiritual minister. I still stand by the assertion that the Church, (and organized religion in general) needs to learn some genuine humility.  Keep the doctrines and teachings, but do not cling so tightly to them that they kill Christ all over again and destroy his message by becoming the most important thing. But don't water down EVERYTHING to the point that it's meaningless either.

But let those who call ourselves Christians, begin with the laying on of hands, the prayers and the breaking of the bread, and let us know Christ among us. Peace and all good.
Posted by Eosaidh at 1:53 AM

What a load of drivel.

That's a good train of thought, a united church in Christ where people actually fully understand what they believe in is the ultimate goal!

A midwife of words and hearts. Dances with the mystics of all traditions, and is deeply interspiritual.

Eosaidh graduated with an M.Div. in 2015 and is about to begin his clinical MSW in the mental health field at the end of August. Eosaidh no longer attends a house of worship regularly, as it were, but practices various traditions spiritually. He is proud to have learn from the mystics who dance within Christianity, Judaism, the Sufi Way, Paganism, Buddhism and Hinduism, yet, ultimately, lets go of all these labels and just IS. His belief is that we must go beyond the walls of religious traditions to the Essence of All That Is. His spiritual practices are meditation and mindfulness.
Eosaidh is blessed to be gay. He is also blessed to left-handed.
Eosaidh believes we should leave the flaps of our tents open in welcome, offering a place of healing and refreshment. He doesn't believe one should take himself of herself too seriously as it is detrimental to their spiritual health. 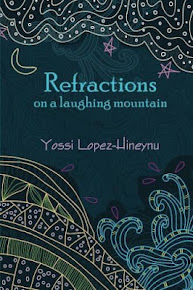 Refractions on a Laughing Mountain